ONE NIGHT IN SHANGHAI

ONE NIGHT IN SHANGHAI
A Book by Eddie Haworth FRSA, Bolton, England 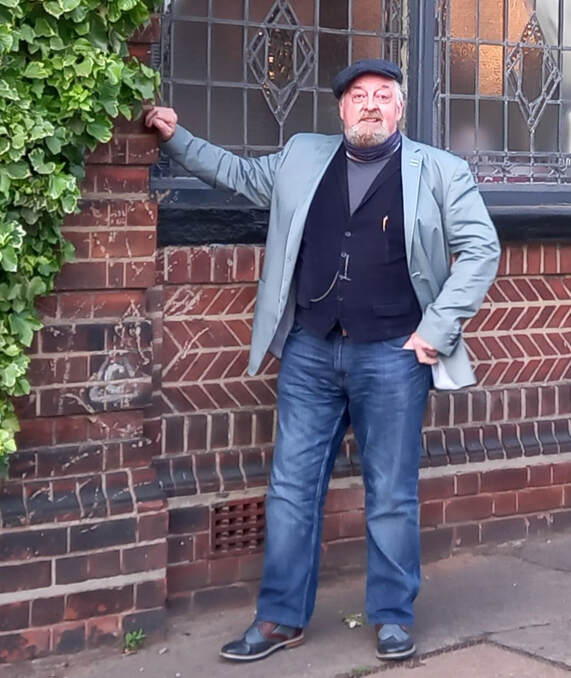 The Powerful Truth About a Life Lost in Bolton, England
and
Found in Shanghai, China

Updated January 2022...
This is the preface to a book telling the true story of  Eddie Haworth FRSA, who was brought up in a deprived area of northern England, he was sexually abused from the age of six.
​
By the time he reached his twenties he had been in jail, was a drug user and a young father.
Following the breakdown of his first marriage, he became a heavy drinker living the itinerant life of a street entertainer for several years, before becoming a full-time professional Circus Clown.

So how did he end up travelling around Thailand’s remote border regions entertaining thousands of disadvantaged people for 20 years before coming back to his roots in Bolton?

The Life of Eckie (AKA Eddie Haworth FRSA)

Eddie in Bolton with his ickle drinking companion, Monty
So here I am back in Bolton. In my seventieth year, having spent what seems like several lifetimes away in different parts of the world, since I ran away from home and school aged 15. I had more than 45 different jobs, a few marriages, and produced 2 known children, 8 grandchildren and 2 great-grandchildren to date.

I worked as a singer, musician, street entertainer and Circus Clown, learning my trade around the whole of Europe from Lapland to Istanbul, the Middle East, New York, India, Shanghai and SE-Asia, eventually finding a semi-settled home in Thailand.

After the fleshpots of Bangkok and Pattaya nearly finished me off, I found a new meaning for my life when I founded a Thai-registered charity servicing the needs of some of the thousands of migrant families lost in the refugee camps on the borders of Thailand, Laos and Burma.

The charity, "Gift of Happiness" serves (pre-pandemic) more than 2,000 needy people per month with essentials such as clothes, shoes, toys, and educational supplies, mostly donated by the well-off in Bangkok. During our regular aid-giving projects, I also entertained the children with clown shows - an entertainment which was totally new to most of them.

Christmas was very special. For many years I spent the holiday period up in the migrant camps, giving shows and also cooking a Christmas feast for the kids and their families. But the last two Christmases have been quite poignant for me: back in the UK, as a refugee from the pandemic, I have been unable to continue that tradition.

My staff and volunteers in Thailand still make periodic trips upcountry bearing gifts for the kids and their families but I really miss being there myself.
​             ...However, it all started in Bolton...
Quote from the book, One Night in Shanghai 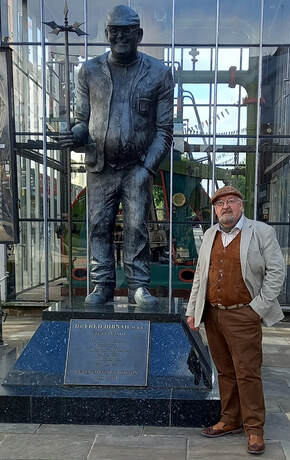 Eddie Haworth FRSA paying respect to fellow Boltonian, Fred Dibnah MBE
​I was born in a caravan which was surrounded by coal mines and cotton mills in the located in a filthy, polluted part of Manchester in the North West of England in 1952. I had two teenaged half-sisters and a younger sister who was born when i was two years old and soon after our parents had saved enough to pay the deposit on a very small terraced house near Bolton.

That is where I spent my early childhood learning how to survive the rigours of living in one of Britain’s most deprived areas in a house that shared an outside toilet with six other back-to-back terraced hovels.

​This was also during a time when children like me were often left to get on with the business of growing up virtually alone while our parents went out to work for 12 hours a day in, truly, dark satanic mills, factories or coal mines.

However, I think I was still quite a happy child living the same life as all my friends and family who knew little about how green the grass may be in more affluent parts of the world, or even just within the small town where I lived?

I was happy at least until the age of 6, but that’s when my innocence and childhood was sickeningly ripped away from me by the first of many evil men and one woman who’s selfish aim was to steal the very soul of any child, alone and vulnerable enough to be drawn into their grasp...
​(None of the predators were family members)

​​It wasn’t until I reached my early 40s when faced with a life-threatening trauma that I realised I’d never really had a happy childhood or even a stable adult life.  I reached that realisation following some expertly administered therapy that I needed to help me recover from years of mental instability, alcoholism, depression and suicide attempts. 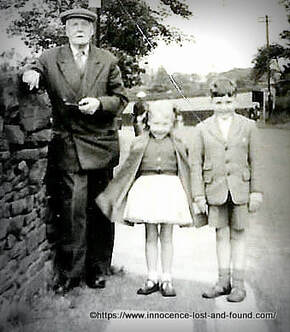 ​Through the therapy, I learned to face up to the mistakes I had made and the pain I suffered.  Then in my early 50’s I started to discover that the mistakes have made me smarter, the pain has made me stronger.​

​More importantly, I learned to spot damaged or lost innocence in those who may not yet know how their own childhood is being or has already been stolen from them.
​
So now I use my training and experience in delivering empathy and pathos via the art of my "Character Mime Performances" as a tool to help fix many broken young souls who I choose not to ignore.

​​In this way, I am happy to give them a glimpse into my own lost dreams, hoping they may eventually replace their nightmares with happy memories they never dreamed they could own.

The first part of the book, a trilogy, will be published in late 2022. - ​Pre-Launch enquiries; CONTACT 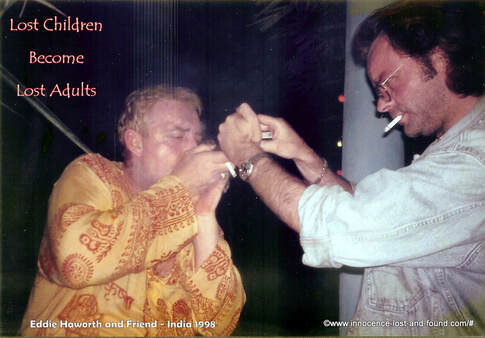 Part of the long lasting "Lost period" in Eddie's survival?
In short...

My youth was agonisingly lonely, in maturity I was tortured and disruptive, yet middle-age empowered me.​..

​This life of mine has been one hell of a ride so far, even though I've spent a great part of it staring into the fiery jaws of those paedophile monsters who gnawed away at every fibre of my innermost soul.

But now I have finally reached Valhalla and I have built a safe and happy environment that I am proud to share with thousands of innocent children and hopefully with the remains of my own family before I reach my expiration date.
​
​"Alas, not with the only true love of my life, Charlotte".

"If you never heal from what hurt you... You'll always bleed on people who didn't cut you". 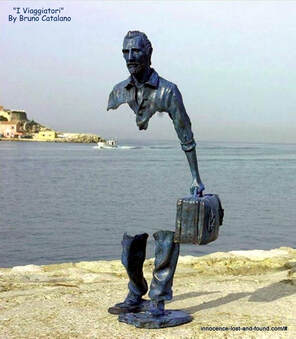 ​Eddie spent most of his life running away from home? ​The empty spaces were created before his adult body started its journey?
If you have been abused or are still being abused.
You probably just need a little help from someone who can listen to you and allow you to cry while you tell the darkest secrets you have been trained never to tell to anyone?
​
​Child abuse can happen in different ways, and can include neglect as well as physical, emotional and sexual abuse. In many cases, people experience more than one type of abuse. Often, people abuse others because they want power and control over them. If you were abused as a child, it's important to remember that it’s not your fault or because of anything that you did. Abusive behaviour towards children is always wrong and never the child’s fault.
​
It's well-know that around one in four adults, both male and female, has experienced abuse as a child. Some find that with the support of their family and friends they are able to move on from their childhood abuse. But for many survivors, talking about the abuse to someone who is professional, caring and independent, from an organisation that helps survivors, such as Victim Support, is an essential step...

Remember... If you're not speaking It, you're storing It.
​"And That's A Heavy Load To Bear"

Since the year 2000, I have lived in the far east where I became the Founder of a registered charity, existing under the Royal Patronage of His Majesty King Bhumibol Adulyadej of Thailand.  I have also worked as a professional family entertainer and Lecturer at many top-class International schools, five-star hotels, prestigious gala events and TV appearances.

Just before the Pandemic hit the world in March 2020, I decided to visit my family back in the UK.

I am now living in my hometown of Bolton, near Manchester, having spent some time in Scotland where I also have a granddaughter.  I am remotely directing a small team of staff and volunteers at the charity in Thailand, while gradually passing on the workload to a very competent volunteer Operations Director.

Now, in my 70th year, I am passionate about using my painfully acquired life experiences to help other victims of child abuse discover ways to survive and thrive.    I can only do this by presenting the award winning Film "That Fat Bloke from Bolton" and my book, "One Night in Shanghai".

I plan to give free Lectures and helpful advice on surviving the devastating consequences of child abuse at venues throughout the UK.  There, I can use my extensive knowledge and experience to teach victims how to become survivors.

However, since my return to the UK, I have used up my entire life savings; I have no private pensions and have become totally reliant on the standard minimum British state pension, plus my means-tested social housing benefits.

Please support my cause by donating whatever you can afford to help cover travel/accommodation and booking venues costs...

Quote The Guardian
"People who were sexually abused as children were three times more likely to try to kill themselves, according to a new study in Psychological Medicine".

PLEASE  DONATE  ANY  AMOUNT (Worldwide) TO MY CAUSE...

​Email a copy of your payment slip to receive a personal thank you message from Eddie
​ HERE
Payment Slip
screenshot or photo also acceptable
Adult survivors of abuse...

“Healing doesn't mean the damage never existed. It means the damage no longer controls our life.”

You cannot run away from any child abuse you suffered. But you must remember... IT'S NOT YOUR FAULT!
​
​       "And it is not Impossible to live a meaningful life even with the memories of what happened to you"
READ MORE
​


​These links may help if you have survived child abuse:
https://www.mind.org.uk/information-support/guides-to-support-and-services/abuse/sexual-abuse/
https://www.supportline.org.uk/problems/child-abuse-survivors/
https://www.victimsupport.org.uk/crime-info/types-crime/childhood-abuse
https://napac.org.uk/key-facts-figures/
Enquires; CONTACT
Copyright © 2022 Eddie Haworth FRSA  (Fellow of the Royal Society of Arts)
Warning; All news reports/articles, photographs or other intellectual property published by Eddie Haworth FRSA belongs only to Eddie Haworth FRSA.
​We consider any unauthorised use of such property as theft. Eddie Haworth's Lawyers offer free services to Eddie and are more than willing to prosecute offenders!
Proudly powered by Weebly
G-DZQZP7JGBP